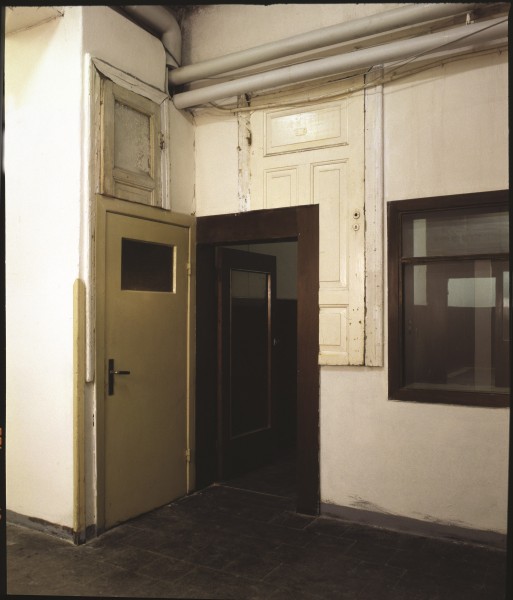 "For this exhibition we were given a space what was strongly burdened with the past: at the beginning of the 20th century it served as a boxing hall, than a fascist printing house, later a storage and a department store... imagine a hundred by fifty meter hall with various connecting rooms. We received a small corridor with several doors. I invented my work for this space. The idea came from the Hungarian countryside's vernacular architecture: due to financial reasons when in their houses they wanted to abolish a door or window, they didn't remove them, just simply masoned them. When later a new window or door was needed on the same wall, they didn't take into account the old existing one, but they cut it through. I thought it would be interesting to reflect the past of the given space this way: I took old, waste doors and placed them one meter high, as if they were left from a run-down historical past.

The visitor enters into a room, where there are doors to walk through, and there are doors of which these new ones cut pieces. One feels that they used to be use but as the ground sank they lost their function." (Gyula Várnai - Krisztina Szipőcs's conversation with Gyula Várnai, Balkon, 2002/7-8)